Grand corruption: new data and documents collated for the first time give a thorough look into the activities of Latin American governments’ prosecutorial agencies for the Odebrecht case

Documents were obtained exclusively by Transparency International and JOTA

“Grand corruption” is the phenomenon described by Transparency International as “the abuse of high-level power that benefits the few at the expense of the many, and causes serious and widespread harm to individuals and society. It often goes unpunished”.

It was the first time that member states agreed to talk about grand corruption, even though the specific term was avoided. A specialists’ summit held in Lima, Peru, in December 2018, organised by UNODC, the UN’s office focused on drug control and crime prevention, reaffirmed the need to understand the phenomenon and work on ways to prevent and combat grand corruption.

The Odebrecht case, the dimension of which became known to the world on December 21, 2016 — the date in which the United States Department of Justice divulged a plea bargain deal made between the civil construction company and the Brazilian, U.S.  and Swiss governments —, is a clear example of grand corruption. In said deal, Odebrecht admitted to having paid, between 2001 and 2016, a total of US$ 788 million in bribes to government officials, representatives of said officials and political parties in Brazil and eleven other countries, nine of them being located in Latin America and two in Africa (Angola and Mozambique). The nine Latin American countries cited by the US Department of Justice are Argentina, Colombia, Ecuador, Peru, Venezuela, Guatemala, Mexico, Panama and the Dominican Republic. The Brazilian company agreed to paying US$ 3.5 billion due to the plea bargain deal.

With the announcement of the deal and the revelations that followed it, it was possible to confirm that grand corruption benefits the few at the expense of the many and causes damage to people and to society. For example, the very low levels of trust in democracy recently recorded throughout Latin America are directly related the recent grand corruption scandals.

Regarding the impunity of the public and private sector agents involved in the case, Transparency International’s definition also seems to hold up. In many places throughout the region, there is a feeling that there is yet much to be done. In the words of a Brazilian investigator closely following the Odebrecht case, “not even 50 per cent” of the facts have been assessed in the other Latin American countries.

Authorities, journalists and experts closely monitoring Operation Car Wash have pointed out that international cooperation and plea bargain deals (together with leniency agreements) are two of the main vectors for the advancement of investigations in Brazil. Data obtained by Brazilian authorities via cooperation with Switzerland’s authorities, for instance, were crucial in proving the illegal banking transactions during the operation’s initial phase, revealing the trails that were followed. Concerning plea bargain deals and leniency agreements, it is believed that information obtained through these types of testimonies, with their level of detail, would be too hard to obtain by other means.

Just as they were (and still are) important in Brazil, these two instruments are some of the crucial elements used to advance investigations in Brazil and the other Latin American countries. However, when it comes to passing on Brazil’s information to its neighbours, there are still technical, legal and political challenges, such as: adversarial systems and justice systems that work in vastly different ways than the Brazilian one; low autonomy for some prosecutorial institutions; and even difficulties in performing digital proceedings. There are also difficulties regarding the demands involved in the plea bargain deals and the leniency agreements. According to the investigators and professionals consulted, in some countries in Latin America there still is — even though it has decreased in recent times — resistance to (and lack of understanding of) the commitments undertook by the Brazilian state in said leniency agreements and plea bargain deals, which may be a result of the lack of legal provisions for these instruments in the region’s countries.

From December 2016 up until now, investigations of grand corruption cases have filled the pages of Latin American newspapers and have caused devastating effects on said countries’ domestic policies. Though the effects have been similar throughout the nine countries of the region, data shows that the different Latin-American agencies’ willingness to fully investigate issues varies greatly — at least that’s what the data relative to cooperation requests sent to Brazil show.

Exclusive data obtained by Transparency International and Brazilian website JOTA have helped by shedding a light on the activities of the prosecutorial agencies of the nine Latin American countries in the Odebrecht case, during the two years (2017 and 2018) following the international plea bargain deal.

Furthermore, exclusive testimonies, together with documents (videos with transcriptions of testimonies and lawsuits) available to the public, collated for the first time, bring new elements that may help Latin American investigations.

In 2017 and 2018, the nine Latin American countries sent, jointly, 118 requests for cooperation to Brazilian authorities (browse through the graphic below in order to view the cooperation requests by year, by country, and by type of measure requested from the Brazilian authorities — such as breach of financial confidentiality actions, interrogations, etc.). However, Peru alone represented more than half of the requests made, with a total of 68 requests. And it was precisely in Peru that the political earthquake made the most damage, with the arrest of two ex-presidents, the suicide of one of them and the resignation of the last president elected: Pedro Pablo Kuczynski left the country’s presidency in March 2018, just before the Summit of the Americas, a meeting of heads of state taking place in Lima, the central subject of which was “Democratic Governance against Corruption”.

The countries that come after Peru in the list of those that made the most cooperation requests from Brazil were Panama (18) and Argentina (12). On the other hand, the countries at the bottom of the list were the Dominican Republic (three requests), Venezuela and Guatemala (each with only one request) — the Dominican Republic was the first Latin-American country with which Odebrecht struck a deal, ratified in 2017 by the Caribbean country.

Beside the Dominican Republic, Ecuador (in January 2018), Guatemala (in February 2018), Panama (in August 2017) and Peru (more recently, in February 2019) struck deals with the Brazilian company.

Apart from the cooperation requests numbers, JOTA and Transparency International have obtained information concerning the date in which the wording for each country’s terms of commitment agreement was agreed upon with Brazil’s Federal Prosecutor’s Office, and the date of the signing of the first document (see graphic). Each cooperation request generates its terms; however, the date of the first terms shows that, from that moment on, the requests were to be answered in a more expedient manner. Investigators and authorities interviewed by JOTA and Transparency International pointed out that, after the first terms were signed, cooperation became “unjammed”. 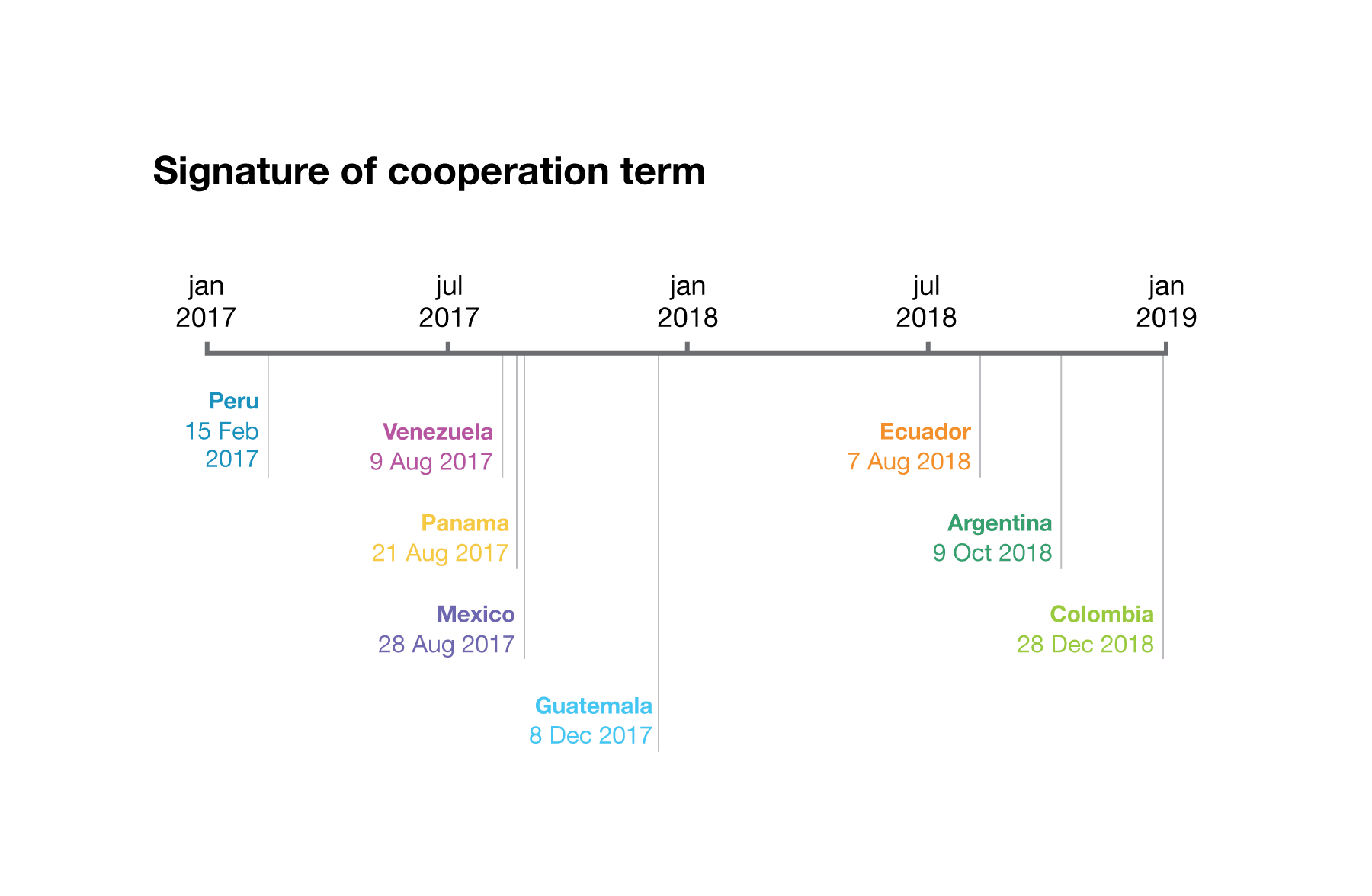 Another form of international cooperation is the establishment of Joint Investigation Teams (JITs), which may operate in two or more countries in order to advance criminal investigations in their respective territories for specified periods of time and goals. According to the Brazilian Federal Prosecutor’s Office, in January 2019, there were negotiations between Brazil and  Argentina as well as Brazil and Peru, aiming to set up JITs. The Brazilian agency’s report does not mention any request to create JITs from the other seven countries (Colombia, Ecuador, Venezuela, Guatemala, Mexico, Panama and the Dominican Republic).

Beyond the new data on international cooperation and the agreement on commitment regarding the usage of evidence, one will find here testimonies that reveal details on corruption schemes in the Latin American countries. Also, for the first time, all the documents (obtained through consultations made to the official websites of Brazilian courts) and recorded testimonies (with transcriptions) available to the public that mention Odebrecht’s activities in the Latin American countries have been put together.

Within this material, one can also find the list of public contracts with possible irregularities, as well as the one with the names of Odebrecht’s former executives directly linked to each of the nine Latin American countries.

Click on each country to get the full file, containing: 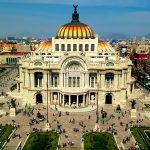